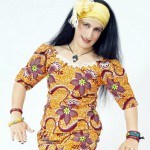 is a professional African dancer and s dance teacher with 15 years experience, she is the founder of expose dance and music ensemble (EDME). Shabnam works as a project coordinator for a lot of African artists all over Europe and Africa. With her passion for Africa, she have started a charity project under the umbrella of Expose dance and music ensemble called EDUCATE THE CHILDREN by EDME, where she voluntarily helps the needy African children to go to school. For Shabnam ”everyone is different but of equal Value”.

Habib is an African dance choreographer, theatre director and a drummer. He started African art in the early 90`s with a cultural troupe called Dzembii in Ghana, he then later studied African dance and drumming at the institute of African studies (IAS) university of Ghana Legon. Habib joined expose dance and music ensemble in the year 2010 as an artistic director. With his experience as an accountant, the troupe decision committee later gave him the role as a treasurer in the year 2013.

After an African dance session with Shabnam, Shabnam later introduced Pernila to expose dance and music ensemble in the year 2013. As a travel consultant, Pernila have been traveling round the world to explore different countries and their culture. With the rhythm of African live music made Pernila discover her passion for African dance. She is currently the secretary for the troupe and also a dancer. Dance and music is the best way to express your happiness according to pernila.

Fabian, a good friend to Habib joined expose dance and music as a percussionist in the year 2012. He is a percussionist, who likes to fusion rhythms from all over the world. Fabian was born and raised in Chile; he started learning music by playing flute at his basic school music class. Due to his curiosity in music, he was later introduced in to African drumming and has been working with that for the past six years. He believes that music is the only tool that brings people from different part of the world together.